My Study and Review of WordPress Work on Elance

The following is a quote from someone who posted a job on Elance:

Anyone who calls me and doesn’t read this, who doesn’t visit the site first, and who doesn’t respond with specific ideas to small task I seek will be blocked from bidding on any future tasks… Meaning you cannot read/listen.

My name is Ken Walden, Founder of Marijuana Nationalization. My goal is to build the most advanced, interactive Cannabis directory. My site is framed using WordPress technologies. My current developer has skills and passion, but the pace of completion is not satisfying me. I need experts and I need them now.

I need experts in WordPress, PaidMembershipPro, WP Scraper, MemberFindMe, , Affiliations, RSS Feeds, WooCommerce, Forms, and most importantly a two step click that send and SMS text from the site as a member. 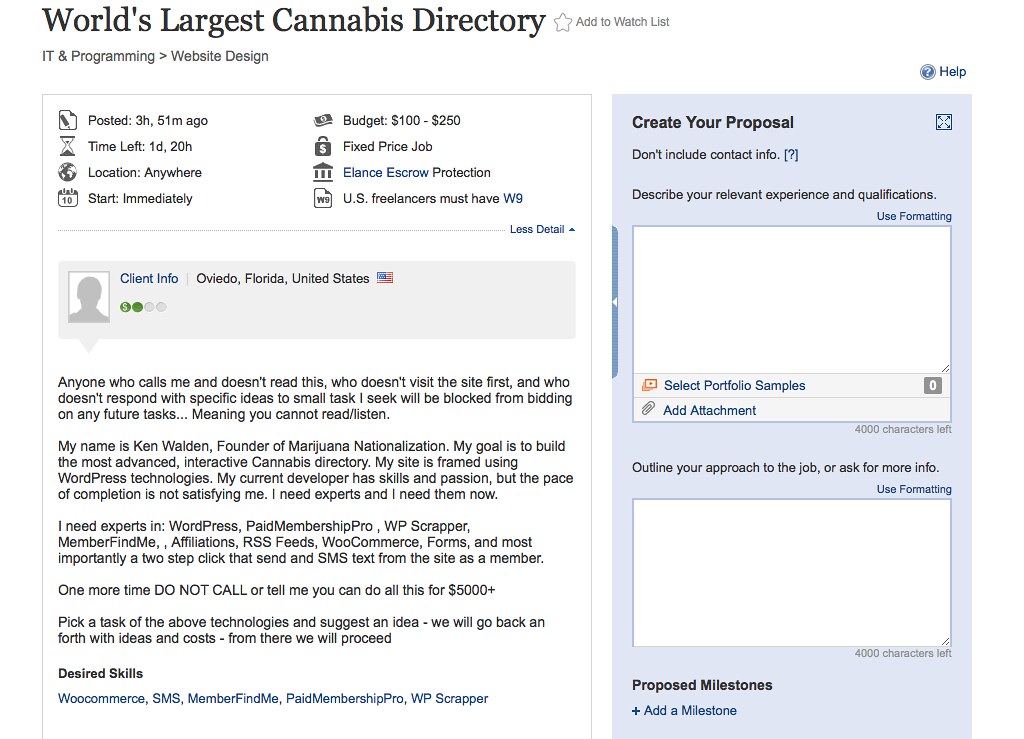 Wow. That’s all I can say. Not only am I appalled that the client is an asshole in his approach to be taken seriously, he also wants “WordPress experts” to build “the most advanced” directory in his niche for a budget between $100 and $250. With expectations and a budget like that, no wonder his current developer is in no rush to get it done. I feel bad for whoever actually winds up doing all that work and letting this person control them for basically nothing.

Last week, I decided to submit some proposals on Elance, a popular website for hiring freelance workers and for freelancers to find work. My intention was not to actually look for work on Elance but rather to see what type of success I would have when submitting proposals that included a price I actually set (a price that did not consider the client’s BS budget for the requirements). For each project, I would take some time to determine the price I would quote anyone who contacted me about a project with those requirements. In summary, I had NO success. I’m not going to lay out a bunch of data and specifics about each project. Instead, I want to share some interesting points and my overall opinion of finding work on Elance. For some more opinion on this subject, check out a post on medium.com about “the real cost of outsourcing work to the cheapest bidder” and Carrie Dils’s post, “What’s it Worth to You?“

When I submitted a proposal, I made a point to address the client and the project details that were included in the description. Most of my proposals included follow-up questions so I could better understand what the client was looking for. Also, most of the projects I submitted proposals for were from clients within the United States. I treated these proposals the same way I would if any random client were to contact me directly. Of the 12 proposals I submitted, I heard back on two.

The first project I heard back from the client regarding was an eCommerce website where the client wanted to accept orders for a handful of products. For this proposal, I asked five follow-up questions based on the project’s description. The client responded with nothing more than a link to a website they liked. This was pointless because I never even asked for it and because the questions I did ask were not answered in any way. I didn’t waste my time copying and pasting the questions into a second message. Learn how to communicate, person.

The second project I heard back on was what seemed to be a simple, straightforward project that added discounted rates for bulk orders (i.e. from distributors) to an existing eCommerce website. I asked a couple easy questions about how they would like to structure the different pricing options but their response was not a simple answer. All of the sudden, this simple project now included the need to install SSL, configure advanced pricing levels and create advanced shipping methods/rates. My initial proposal was for a project I expected to take no more than a day or two and then I had this thrown at me. I informed the client that these new, unmentioned requests would make the project much more complex and I would have to adjust my proposal accordingly. I never heard back after updating my quote and the job was awarded to someone cheaper.

I don’t have a ton to rant about regarding my thoughts on this crapshoot. It is what I expected. There are certainly quality clients who want to hire professional freelancers but, in general, I think most of the people looking to hire on Elance (at least in the WordPress section) are just looking for the cheapest deal or simply window-shopping, so to speak. There are people who seem to want to control every aspect of the project, which crosses the line between hiring an employee and a contractor. Above all else, there are way too many people who just flat-out don’t give a shit about the value of the expertise a skilled freelancer offers. People want things but don’t want to pay for them (i.e. $5,000 in value for $250).

While Elance isn’t as big of a joke as Fiverr (read my opinion on why Fiverr sucks for freelancers), it’s still not the best way for skilled, talented freelancers to make a living, especially for those residing in the U.S. As with Fiverr, you are selling yourself short and working for less than your true value.

If you are someone who has found work on Elance (or any other freelancing website) before, please share your own opinions and experiences below. I’d love to hear about your success and/or headaches!

Hey, I'm Ren. I like to sling code, build stuff for WordPress and write about the stuff I do. If you need help, have a question or just want to shoot the breeze, you can hit me up in the comments, via email, or on Twitter.